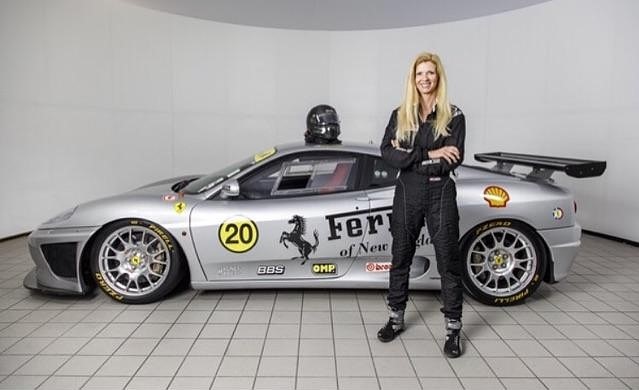 The Auto Blonde is the perfect description of Suzy Hiniker.

As an athletic blonde who is a genuine automotive enthusiast, she is easily noticed on the track as well as the boardroom.

When asked to tell us about herself, she started, “Cars: driving, racing, tracking, judging, attending car events and talking about…. cars.”

Although it was apparent, Beauty & Keys asked if she had always been car enthusiast.

“Yep, have always been a car enthusiast, since I was a little kid,” Hiniker shares. “I had Barbie’s Corvette and RV, which she took on spectacular adventures. Later, I drove anything I could get my hands on.”

Years later, Hiniker gets her hands on quite an array of automobiles.

From Ferrari to BMW to Mercedes, she doesn’t just drive them. She tracks them regularly.

Speaking about her 2000 Ferrari 360 Challenge Race Car, she explained that although the car was Ferrari factory built for the Ferrari Challenge Series, it was never raced.

“With the Evo kit (a front splitter and rear wing) the car is planted to the asphalt at high speeds; it has only been tracked for fun, so it is nearly perfect.”

She also owns a BMW that she races in Sports Car Club of America. 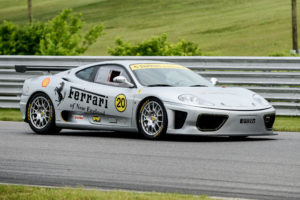 One of her favorite memories was recent, after she took a Pro-Driver AMG course at Circuit of the Americas (COTA).  Taking out various Mercedes-Benz AMG cars on the track over several days, she was able to let loose and have a great time of the track.

Hiniker’s passion is automobiles, which is displayed in many aspects of her life.

Not only is she a partner at an IT Company, she is the Chairman of Ferrari Club of America-New England Region.

Although she was not the first female Regional Director for the Ferrari Club, she is one of the only women in leadership roles.

“It does not faze me to be the only woman at the table, in the drivers’ meeting or on a board. I generally do not notice unless someone points it out,” she said.

Beauty & Keys asked if she felt women should be more involved in the automotive scene.

The  Auto Blonde is a someone who makes it quite apparent it doesn’t matter if you a male of female, show and share your passions regardless.

The last question in the interview sums Suzy Hiniker’s  attitude regarding women taking the wheel.

“What do you think women bring to the car industry?”

“The same things men bring to the industry,” she replied.